Erin Cronican as Mephistopheles - Fighting For My Voice 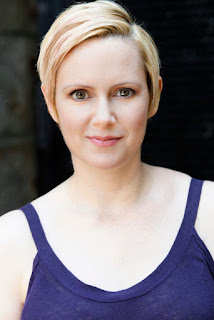 The title of this blog takes on multiple meanings, which I didn’t realize when I sat down to write today. Not only is there the craziness that has been going on with #MeToo and #IBelieveWomen in which my voice has figuratively been silenced, but I been fighting pneumonia for the past few months which has literally taken my breath away. I have felt so stymied that I have been glad for a creative outlet, and I’ve funneled all of my strength into producing/directing a decidedly more feminist take on the enduring fable, FAUST.


I’m fighting for my voice more than ever, and it’s both invigorating and exhausting.

THE HYSTERIA OF DR FAUSTUS is the first play of The Seeing Place’s ninth season, and I’m so proud to be involved as an actor, director and producer. It’s the classic story of a man who sells his soul to the devil, but we’ve chosen to adapt for a cast of just four - three women and one man - which drastically changes the way the play is perceived by audiences. And by having the main antagonist, Mephistopheles, played by a woman (me!) we put further focus on the traditional roles of male and female when it comes to power, agency, and expression. [Tickets through Oct 21, here]

It’s been interesting playing the role of the quintessential devil. Everyone expects the devil to be a man, so there’s a real focus on what I bring to the role to make it different. I have worked hard to make sure that I’m not slipping into caricature or thinking that I’m supposed to be a man. Instead I’m a disembodied, non-gendered spirit that inhabits a female form, so gender has no construct with me. (You’ll have to see the show to find out why this is - no spoilers here!) Another challenge is that this is a character who’s joy and expression of love have been removed from her when she was damned to hell - how do I stay true to that while remaining energized and dynamic as am actor on stage? How do I keep my voice alive?


Part of my inspiration for the role comes from great actors who are crossing boundaries in today’s theater (think Janet McTeer in Bernhardt/Hamlet and Glenda Jackson as King Lear.) And the other inspiration comes from within myself - where is the little girl who learned that she must be quiet - who was she before that lesson and how do I bring her to the surface?

As a director I’ve worked with the female actors to help them find their particular voice as the characters, especially pushing for the to explore their anger and dark emotions in ways that we don’t get to see on stage from women. It’s been inspiring to watch these women come into their own with the roles and make a statement about the environment in which we’re living and how that’s reflected in the play.


All this while I’ve been dragged down by pneumonia, and for months I have been lacking a full bodied voice to speak with. Have you ever had the experience where your speaking voice was inhibited for a long period of time? I have found myself getting smaller and smaller in everyday life, while becoming more and more frustrated by my lack of personal expression. People who know me have assumed that the reason I’ve been sick is because I run myself ragged. And that may be true - running a theater company takes a toll, especially when working on a project that is so personally impactful. But I’m starting to feel like the loss of my figurative voice has made my literal voice disappear as well.

And it’s funny - as soon as we started run-throughs of the show where I was inhabiting the character for more stretches at a time, my voice started to come back. It’s as if my artistic expression on stage is helping with my personal expression in life. And the more of myself I reveal as an artist on stage, the more I’m revealing in my real life.

I hope that you’ll be able to come out to see this play. It’s got the thrills and chills that you expect from a play about the Devil, but it also poses questions about the nature of consent and desire that’s apropos of today. It’s also achingly funny, and I think it’s so important to laugh during these trying times.

Erin Cronican is appearing as Mephistopheles in THE HYSTERIA OF DR FAUSTUS. The show must close October 21 - To get tickets or to see reviews and production photos, visit www.seeingplacetheater.com/shows/9-faustus.html.

Posted by Erin Cronican at 9:39 PM