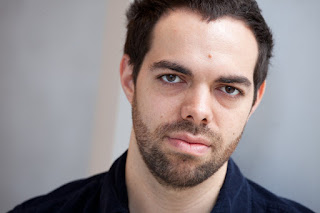 I really didn't know what I was getting into, probably much like Doctor Faustus' pact with the devil. I thought it would be a relatively easy task to adapt the play. After all, I've adapted ANTIGONE and THE STRANGER, and I've written two other full-length plays. It seemed like more of the same. Boy, was I wrong.

Since beginning, a few people have asked what drew me/us to such grand and epic material. I guess it didn't start to hit me what a gargantuan task I'd undertaken until I finished writing. In the process, I recognized that the play had gotten a Hell of a lot more personal than I had been expecting - pun intended. It's quite confronting to write a play about an aging, suicidal nobody, waking up to his own repressed desires. I think that, in a way, we can all understand. There are always these things we want that seem to be just out of arms' reach.

That's just the first problem. Really, this was also my first time writing an intimate scene as well - which is an unbelievably personal thing to do. And then there's the whole issue of the decline that Faustus runs into when he realizes that nothing is filling the gap in his life. And that's probably what's been most difficult for me as an artist: this is largely a play about someone that gets what he wants - and still isn't satisfied.


As an actor, it's also an interesting issue to work on a script you've written. I've largely had to disassociate myself from the writing in order to accomplish what I'm doing onstage, and I've been much more successful than I was with my first play, WHEN WE HAVE GONE ASTRAY - in which I remember feeling so self-conscious onstage that I swore I'd never act in one of my own plays again. See, generally, there's someone else to blame as an actor. But when you're the writer AND the actor, the finger is going to point to you, no matter what. In my second play, SCOTCH KISS, I didn't write a character for myself. Same goes for THE PEOPLE VS ANTIGONE. I did write a part for myself in THE STRANGER, but we haven't done anything other than readings of that at this point. So, this is really my first time back since my first play. It's helpful that it is an adaptation - and I've tried to keep pretty true to the source material - even with the modernization. I've essentially pulled the story from Marlowe's texts, but the characters from Goethe's play - so, it isn't just the love story we see in the Opera of Faust. It is a story of corruption. It also helps that I'm not directing - and though I wrote the play, it's a very different thing to live through something as an actor than as a writer. So, once I started acting, I still had to learn how the behavior operates though me.

I'm very lucky to be working with the group I'm working with, and everyone has been very patient with me as I've caught up to them in terms of my work in rehearsals. Probably the biggest challenge I've had as an actor is that I've had to age myself 40 years for the top of the show - and I spend about an hour doing my hair and makeup before every show. I have a whole physical and vocal character that I put on for it. It's quite extensive. Then I have a few minutes as myself, sharing a fun banter with my partner in crime, Erin Cronican, as Mephistopheles, before putting on a second persona, an English novelist named Henry Faust. Then I have an extensive make-out scene that turns into a "me too" moment with Broghanne Jessamine, which though it's always nice to kiss someone, has got to be one of the most nerve-wracking things I've ever done onstage - especially considering that I wrote it. And I always come away from that feeling like a pretty terrible human being. And then everything goes south for Doctor Faustus, and I spend the rest of the play covered in blood from various people and filled with guilt, loss, and emptiness - literally haunted by Candice Oden as Martha, one of the many people I've destroyed.


I think that the biggest surprise to me has happened in the playing of the role. I just didn't realize how profound the subject matter is. Hell really is a state of mind for Doctor Faustus. It's a fascinating thing to get what you want, because it really isn't ever enough, is it? We always think that things are going to be better when ____. And they just aren't. And related to the "me too" movement, it's been an interesting thing for me to tap into the many things I've done in my life to contribute to the problem. I can't speak for men everywhere, but I can say that I have crossed a lot of lines in my life. Most of them were not seemingly disastrous at the time, but I'm not proud of my behavior either. I have been creepy when I thought I was being romantic. I have been forceful when I thought I was fighting for a relationship. I have taken advantage of people who looked up to me when I'd convinced myself we were on an even playing field. I have also been on the other side of things. I was molested by a director in my early years as a professional actor. I know about compromised situations firsthand, and it's quite powerful to share them so viscerally both as a writer and an actor in this play.

Finally, it's really very exciting to me that this production is so ensemble in nature. The same basic themes are present for all of the characters. Gretchen is not just an innocent victim in our production. She has some responsibility in her own downfall. Wagner and Martha are both complicit as well. Really, we are all victims of our own envy, even Mephistopheles - and so, the audience gets to share in that from many different perspectives. I'd say that everyone that sees THE HYSTERIA OF DOCTOR FAUSTUS can really see themselves in at least one of the characters, if not all. It's a timely and important story - and just in time for Halloween.

Brandon Walker is appearing as Dr Faustus in THE HYSTERIA OF DR FAUSTUS. The show must close October 21 - To get tickets or to see reviews and production photos, visit www.seeingplacetheater.com/shows/9-faustus.html.

Posted by Erin Cronican at 3:28 PM