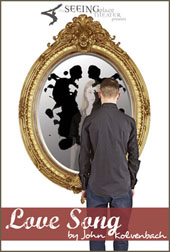 On opening weekend, we were excited to have Megan Smith (@mightymegasaur) in our audience. We asked Megan to use her phone to “live tweet” throughout the show, letting fans know about her thoughts about feelings about LOVE SONG while it was happening (think: running commentary that you hear on DVDs, only it’s on Twitter in 140 characters or less!

7:40pm Megan @mightymegasaur
“the pre show music is kinda dark and intense so I like to play something light for the actors” -Shannon #lovesong


7:50pm Megan @mightymegasaur
However far away, i will always love you…Singing along to #Lovesong by The Cure brings me back to my high school days


7:55pm Megan @mightymegasaur
I hear there’s a big secret in this play. Hooray potential #spoileralert. I can’t wait to see if I can figure it out! #lovesong

8:09pm Megan @mightymegasaur
Taking Joan’s side on this one, u shouldn’t cry when ur boss tells u to file correctly. Oh & keep your underwear out of sight lol #lovesong

8:25pm Megan @mightymegasaur
So true! “I was in love and in Paris, you keep the ashtray”-Molly aka @erincronican #lovesong


8:28pm Megan @mightymegasaur
ohhhh…k…..”I don’t want to have a fork if it’s going to lie to me”-Beane aka @ohbrandonwalker #lovesong


8:46pm Megan @mightymegasaur
Okay there must be a secret here about their relationship… Who is she, really? #gettingwarmer #lovesong

8:51pm Megan @mightymegasaur
#liberated Beane is cracking me up #lovesong


9:31pm Megan @mightymegasaur
#newbeane is romantic bringing Molly flowers and telling the story of how they met :) #lovesong


9:35pm Megan @mightymegasaur
Ahh love “I will build a house in your molars”-Molly #lovesong

9:40pm Megan @mightymegasaur
Oh snap the secret is out! #lovesong


9:50pm Megan @mightymegasaur
Genius use of the set here in the 2nd act, bringing back that intensity of the closing walls, very nice! #lovesong


10:01pm Megan @mightymegasaur
These poetic turns in the script are really interesting, nice juxtaposition with the comedy #lovesong

10:15pm Megan @mightymegasaur
Took a quick survey of audience, seems abt half & half as to who was able to figure out secret but it certainly evoked emotions #lovesong


Doesn’t that make you want to see the show? :) Get your $12 tickets here: SmartTix.com.

Email ThisBlogThis!Share to TwitterShare to FacebookShare to Pinterest
Labels: In Performance