The Pitfalls of Off-Off Broadway 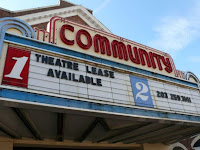 Howard Sherman at The Huffington Post put out an article yesterday about Community Theaters.  It's all about how we degrade "community theater", when in reality, some of the most inspiring work happens just there.  I want to take this all a step further.

Off-Off Broadway has a major problem:
Very few people believe in it.

But that's not where the problem stops.  This is the Empire State.  With enough money, you can pay your way into anything.  This includes the producing of "Great Art".  And our newspapers buy into that concept.  As long as you get your theatrical production put up in an expensive building, pay a publicist for your connections, and advertise for your audience, you stand a pretty good chance of getting any paper you want to review you.  And so long as you have a passing product at the end of that mess, you'll get a good review, and you might get people to show up to see the show - but that's a long shot.

But let's say you're not made of money.  You'd better have a relationships with the next hit writer.  And as long as you're constantly putting up new work, the big papers will try to make it to your productions as much as they can.

If you don't fit into the last two paragraphs, then you sure as Hell had better have a crazy concept going on - you'd better be doing Viewpoints work, have some dance or movement twist, incorporate some angle in a bar, be doing site-specific work, or you'd better be riffing on another successful idea to borrow their credibility.  And then you'll get some of the big papers some of the time.

But let's say that you believe in actor-driven work.  Let's say that you believe that we have a lot of great stories in our history that haven't been told all that well.  And let's say that you commit to bringing justice to these relevant stories and sharing them with your community.  Let's say that your angle is as simple as doing good, believable work.  Nobody trusts that.  Why not?  Because everyone professes to do it.  But most theaters don't have the faintest idea how to accomplish that.  And audiences know that.  So, people wait to see what the reviews are gonna say before they'll trust THIS theater.  But the big reviewers don't want to come out, because most of them don't trust it, either.

So, you're faced with the following situation:  Because everyone pretends that they know what good acting and good theater is, and because every actor thinks that their talent gives them reality on the stage (so long as there's a good director and good blocking and good sets and lights and costumes) . . . and because everyone wants to pretend that there's nothing special about James Cagney and Marlon Brando and all of the rest of the greats we once had . . . the community is suspicious of theater that professes to be alive.  Because most companies misrepresent themselves.

As if that weren't enough...

Off-Off Broadway is a conglomeration, involving everything from community amateurs to seasoned, professional artists.  It's chock-full of vanity projects.  And there are way too many companies to count.  To put up a show for three weeks at a run-down theater costs a minimum of $8,000 . . . if you rehearse out of your home.  People make fun of the fact that so many fundraisers are necessary just to keep our theaters alive, but it's an amazing feat, producing in this market.  The amount of resistance that all of us producing on this level are dealing with is staggering.  And most of us can see it when we go see our friends' shows - with five other people in the audience.

Keep in mind:  Off-Off Broadway can't really afford previews.  The theater rental costs too much.  We can't have long rehearsal periods.  Our Union won't allow us - or they will for a lot of money.  We can rarely say our art has been vetted by reviewers that make a difference.  But Off-Off Broadway is the place to see passion onstage.  Very rarely can you see it elsewhere.  And anyone that tries to make a functioning company out of all of this insanity, all of this nonsense that has to be waded through to stay afloat as an arts organization, should be revered in some way or another.  This is a city that plays more to visitors than residents.  Everything feeds out, rather than back into the community.

I've thought for a long time that you can see great work in only two places:  1.)  On the biggest stages for the biggest bucks.  And 2.)  In a community theater.  Why?  Because at least amateurs are doing it for the love of it.  Most people in the middle are just trying to imitate the work we call great - so, the middle ground is false art, mostly regurgitated.  But some of them aren't.  Some of the work on the Off-Off Broadway level is truly inspired.

And that's where The Seeing Place Theater lives.  We're in the middle.  And we're doing work that should be noticed.  We're not amateurs, but we're not billionaires.  We're a bunch of passionate individuals, who have a craft and a means of creating life on the stage - and we're all committed to working as a cohesive group, in service of the stories we tell.  It's representative of the world we live in.  It feeds back into our community.

Now, how do we, as members of that community, overcome the pessimism that we're living into?
We have to reach our community to let them know we're here.  Over and over again.

What do you think?  What's your experience of  Off-Off Broadway and its value in our community?
Posted by Brandon Walker at 10:34 AM

Email ThisBlogThis!Share to TwitterShare to FacebookShare to Pinterest
Labels: Art of Producing, The Marketplace